It adjusts with the wire that the hammer head is on. The hammer on the movement gets its final adjustment by bending the wire the hammer is on.

The destination where the hammer should strike is in the center of the round gong, on the flat portion. This is where it should make contact. When the hammer is at rest, it should be about 1/8 inch away from the gong wire.

There needs to be a space between the hammer and the gong wire so the hammer will make a crisp gong sound without double hitting, thudding, or missing the gong completely. The gong comes with a small metal mounting base. After the base installation, the gong wire is next. The base has a mounting screw that is already in the base's center. Take the screw off the base, put the gong wire on it, then screw it back together. The dial on this kit is a simple white round dial with gold trim and Arabic numerals. We drill the dial for the winding arbor configuration of the movement. This is done so the clock can be wound up with the key.

Attach the dial to a thin board by drilling holes and using some brass finishing nails, or screws, to adhere it to the board. Alternately, epoxy will also work to attach it to the board. Position the dial so the hand shaft itself and the winding posts align with the dial holes.

After mounting the dial, it is time to put the hands on the clock. First, install the hour hand. It is a friction fit, twist and push down toward the dial at the same time. The more down the hour hand the tighter the fit will be because the post is tapered.

Fairly snug but not touching the dial or the minute hand. The hour hand, the dial, and the minute hand should all be parallel with each other. They cannot hit each other during any part of their rotation.

Hands for modern German units have a center mount in the minute hand that rotates. If the clock does not strike exactly on the hour or the quarters like it should, follow the following steps. To correct this issue, take the minute hand off of the clock and turn it over. The three components are the suspension spring at the very top, the leader it hangs on, and then the pendulum length all the way down to the very bottom of the pendulum rating nut threads. Once the leader is attached to the suspension, bring the two part assembly back up to where it should be. Reinstall the thumb screw that holds the suspension spring, and now also the leader. Hang the pendulum onto the bottom of the leader and put it in beat. It will not run if it is not put into beat, this is easy to do.

Every pendulum clock needs to be put into beat to operate. If the clock is not put into beat it will run for 5 minutes to 12 hours and then stop every time.

A common issue with mechanical clocks is that it stops working after moving it. This is usually from someone moving the clock without taking the pendulum off and this puts the clock out of beat.

Out of beat is a term in the clock repair world that basically means the clock is going tock-tick, tock-tick instead of tick - tock - tick - tock. The easy fix is by tilting the clock and putting a shim under one side.

This can temporarily correct the problem and the clock runs fine. This method, however, is not as good as correcting the beat and having the clock run when it is truly straight and level.

The pendulum is responsible for all the timekeeping of the movement. There is a rating nut on the bottom of the pendulum that turns to get the time perfect. Timing a clock takes some time and patience to get perfect and adjust it a few times to get it right.

When turning this nut, it is either raising or lowering the round bob at the bottom of the pendulum. This positioning is what speeds or slows time. Turning the nut to the right to raise the bob, time will go faster. Turn it the opposite way to slow it down. 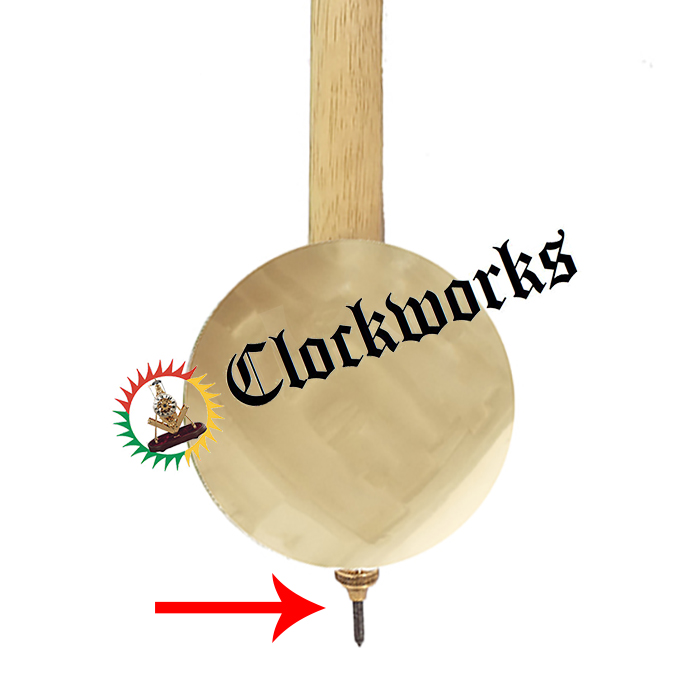 The content of this website is copyright by Clockworks and written by James Stoudenmire in year 2022
↑ Back to top
Tags: WMwall installationWall instructions

These instuctions are great and very easy to follow.