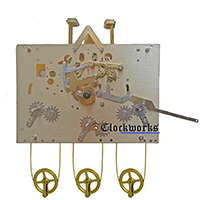 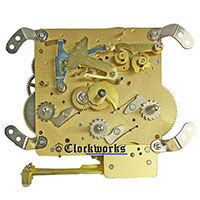 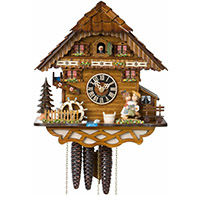 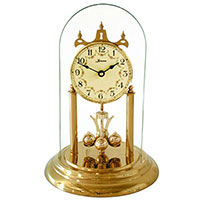 Why order a movement?

A new mechanical clock movement can ship from USA the same day you order it, so the time it takes you to get your clock up and running is quick. A repair can take months. Read More »

A repair usually takes weeks, or even months, to complete and in the end you are still left with an old movement that will need another overhaul at any given moment.

The cost of a new movement is usually the same if not less than a cleaning of the old unit. The new movement should last another 25-30 years without thinking about replacing or servicing it again.

Some new units have bronzed bushings in key wear areas to increase the life of the movement. Also, on the non-pendulum units there have been improvements on the balance for longer life and ease of timing.

We here at Clockworks offer only the highest grade mechanical clock movements and they come with a 2 year warranty.

What happened to the old one?

If the mechanical clock movement is 25 years old or more, the clock oil has become a solid. Meaning the oil is now a black sticky tar substance. This tar substance causes too much resistance for the clock to run. Read More »

Between this, and the solid oil, the clock ceases to function. To have this repaired is an expensive and long process.

To have a mechanical movement serviced can cost hundreds, if not over, a thousand dollars and in some cases it can take months to complete it.

How to identify the movement

The numbers on the back plate of the brass movement tells us much of what we need to know. It may not say who made the movement but the numbers will give us the information. Read More »

The movement numbers also usually tells us the way the clock chimes, where the chime hammers are located, if it's weight or spring driven and much more.

Usually all the old parts such as the clock weights, pendulum and hands will all work with the new movement, as the new one will be the exact same thing as your old movement.

How to order the movement

If the clock is made in any other country such as USA, France, Korea, or China, then you need to contact us via email with pictures of the movement to [email protected] so we can try to help with either a repair or replacement.

The second thing to do is to use the numbers that are on the back plate of the German mechanical movement to determine who manufactured it.

Using the examples below, narrow down the manufacturer of your movement and go to that clockworks.com web page to order. When you get to the proper movement on the website, do not worry if the picture is not exactly the same as what you have. The matching of the mechanical clock movements number is what makes the difference. If the old movement number matches the one on the list, then you will get that exact same movement.

The availability, at this time, is excellent. We stock all Hermle Clock Movements, with very few exceptions. Some special CM lengths may be a special order and will take a few days. Read More »

If it's not on the charts then it most likely will have to be made up special for an extra $20. This is a special order so please call it in.

Hermle is one of the biggest movement producers in the world today. Not only do they have the most movements being made, but they also have the best part availability when you need a component such as a pendulum or a dial, or a complete clock kit.

A Hermle Clock Movement generally lasts 25 to as much as 40 years. We usually get calls to replace units that were built in the early 80's or late 70's.

If you look at the back plate of the movement, you will see a couple of numbers above all the other numbers. You will see a number such as a 77 or an 83 or so on. This is the date the movement was built.

Replacing these units rather than getting them cleaned and oiled is usually the smart way to go as it has been factory improved, brand new, factory lubricated, easy to install, and it will cost less than a cleaning. Keep in mind however, that there are different grades of the same movement number. Some are cheaper, but they contain plastic parts.

The Hermle units that we offer here at Clockworks are the best grade available with no plastic components for a very reasonable price. The movement number has three or four numbers, then a dash, and some more numbers, then a CM length underneath it if there is a pendulum.

They are all consistent as they always have the numbers, then a dash, then more numbers. Basically if there is a dash in the movement number, and it's all numbers in the beginning with no letters like "A", it's a Hermle unit for sure. If there is an A before the number then it can still be a Hermle, but with the Seth Thomas name and numbering system.

Kieninger clock movements are sometimes a bit tricky to tell what the actual number is. They give part of the numbers but then it is up to you to use the chart to figure out the rest of it. This would depend on if the movement is chain driven or cable, the pendulum length and so on.

We only have floor, weight driven mechanical clock movements by Urgos at this time. The factory was purchased and that is all that they are making at this very moment. Read More »

If the clock movement is spring driven, then email us the movement numbers and we will see what we can do with a Hermle mechanical clock movement that is close to what you have.

Back in the old days, there was a company who sold many mechanical clock movements out of Plymouth Hollow, CT and so they changed the name of the town to Thomaston, CT after the company.

So now if the clock is very old and made in the USA with an ST marking in a diamond shape, then that is an original Seth Thomas and there would be no replacement movement for this. Your only option is to get this repaired.

If the Seth Thomas clock movement says made in Germany, then use our list to see what the real clock movement numbers are so you can price it out and order it. The thing is, the company did not produce any modern clock movements however there name is marked on them as their own. So if the clock says Seth Thomas but it was produced after around 1960, then it is made by someone else with the Seth Thomas name.

The Jauch clock company is no longer in business and nothing is available new. We may be able to help with a brand new Hermle mechanical clock movement retrofit instead. Read More »

If the movement says made in Germany and there is not much information on it but just numbers similar to the ones listed, and it's chain driven with a wood stick pendulum, then it is a Jauch clock movement that we can usually provide a retrofit for.

You would need to go to the Mason and Sullivan page and look up the M+S movement number, and then you will see the real movement number from the true manufacturer where you will be able to order.