Hermle QuartzWhat to do to fix the clockHow to do itHermle quartz removalMeasuring the handshaft lengthBest alternate units
Please view these information tabs to help with determining the proper Hermle Quartz Clock Movements for your clock.

The Hermle Quartz clock movements are discontinued and no longer available. This section will discuss what to do for a new unit.

What we can offer

clockworks.com offers alternate movements that have the equivalent sound quality and lasts longer than the Hermle units. They have more features and does not break during daylight savings adjustments like the Hermle Quartz units did after years of service. To get the new movement some things are required to do. First is to be sure the new one will fit into the clock case because some are larger. Then convert the hand shaft from the old one to the new because it is measured in a different way. Lastly get new hands as the old ones will not fit.

Once the movement out of the clock and measure the hand shaft it can determined what new movement post length to get. Hermle quartz is not the same as the typical because there is no threaded post. Instead it only has a hand shaft that sticks straight out of the clock movement. Instead of a threaded post on the movement they had a long lock collar to secure the movement instead. Hermle quartz hand shaft is measured from the black plastic base and all the way out. This would be measured out to the end of the minute hand nut area. After measuring this length, subtract a 1/4 inch and this is the post length needed on the new unit.

Getting new movement requires to remove the movement from the clock case and do some measuring. So the first step is to get the movement out of the clock. The second is to measure the post that the hands go on. This is measured from the black plastic base and all the way out to the end of the minute hand nut threads. With this measurement, deduct 1/4 inch from this, and this is the length that is needed for the new one.

Removing A Hermle Quartz movement is done by removing a unique mounting nut. It is not the typical 6 sided hex nut like most units have. Instead, it is a nut that has slots on both sides of the hand shaft. It's just a different way of securing the Hermle Quartz movement to the back of the dial. The slots on the nut have a deep collar with threads that go through the front of the clock dial to screw into the movement. This is in opposition to the common style quartz unit that has a post with threads and utilizes a hex nut. That is the hex nut on the front of the clock face to secure the movement.

If the movement mounts to the dial by double sided sticky tape, carefully pry the movement off the back of the dial leaving the dial in tact.

Steps to remove a Hermle quartz

With the Hermle quartz movement out of the clock case, now we can determine the best substitute movement. There are several to choose from.

How to measure the Hermle Quartz handshaft. Measure the entire post that sticks out of the movement. From the plastic base all the way out to the tip of the post. This measurement is different from how all other quartz units are measured.

Hermle used three hand shaft lengths on their base units. These lengths are 16mm, 21mm, and 26mm. There was a time some of the 26mm had an internal modification to create an extremely long hand shaft. It was something like 1 1/4 or 1 1/2 inches. If working with one like this there is no replacement for this unfortunately.

The following is the conversion from the Hermle Quartz hand shaft length, to the length of the threaded post to order from us.

Next step to replace the Hermle quartz

Now that the old unit is out of the way and the conversion is known from the old hand shaft length to the new post length, we are ready to shop for a replacement. The next step is to take note of the overall size of the new movement and be sure that it will fit dimensional behind the dial.

The new unit may be taller or wider so be sure it will fit in the clock case. If verified its ok, we can pick a new unit with the post length that was converted. Be sure to get new hands as well. They are on the same page as the product. The old ones will not fit without modifications. The best Hermle-quartz clock-movement-alternatives, or replacement are found in the list below. The list is in priority of the best replacement choice to the least. What this means is the closest to the old size, with the best sound quality has the best rating and is on top of the list. It also has the price in this order also, highest to lowest.

Hermle quartz clock movements are no longer available, so these are the alternative replacements. They usually decide to give up the ghost at daylight savings, or when there needs to be an adjustment in the time.

Note on the 2117 - Unfortunately, there are no quartz units on the market that will play the ship's bell strike. It is a tricky situation with these as there is no quartz replacement for this one. You can go with the mechanical movement if you do not mind spending about $500 and some time and patience. It will be a conversion process and has quite a bit of involvement. Please contact Clockworks if you would like to pursue this option. 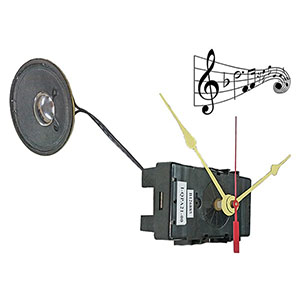 Westminster or Ave Maria, quarterly or on the hour only. Westminster every quarter. Or Westminster, Ave Maria, Bim Bam options only on the hour. 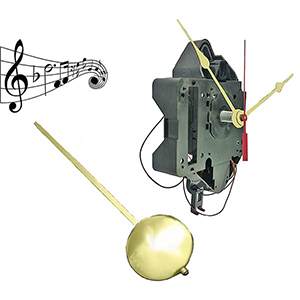 Westminster or Whittington on the quarters Westminster on the quarters