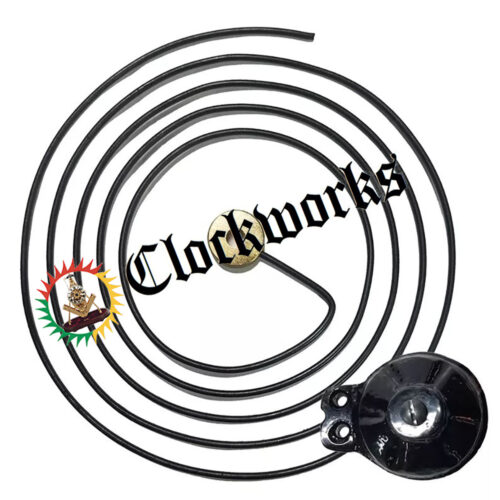 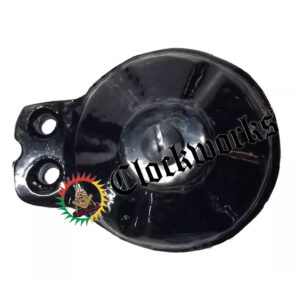 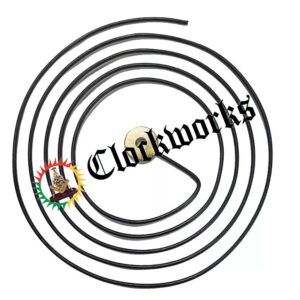 Wall Clock Coil Gong 4 3/4 diameter with a brass center bushing. Includes the gong mount which mounts to the back of the clock case. There is a screw in the base that will come out, and go through the center bushing to mount this. Bend the wire on the hammer so it is about 1/8 inch away.

Why we offer only the complete chime-block

We now only offer the complete clock chime-block and rods. The rods are a press fit into the chime-block by machines and it is difficult to get a single rod out. Other times there are threads that go into the block but have such a secure tight fit, you cannot remove them.

Trying to do so would result in more rods breaking. Also there are various threads on the rods that are the replacements and it can create much confusion. It is for these reasons that we now offer the complete clock chime-block and rods.

Overall, it is a tricky thing to get the correct thread size for the individual rod in a chime-block and rod set and have it fit perfect. Not to mention, when the chime-block rod is not the correct size, often enough it gets sent back. Then we get into the situation of trying to swap it out over and over.

Moreover, all of it eventually ends up being a return for a complete chime-block and rods set. So, in the long run it is best to just get a new chime block and rod set from the beginning. That will save a lot of time and frustration.

If the clock is on a hard wood surface it will be louder. A rug will be quieter. The proximity to the wall can also alter the sound. It has nothing to do with the chime-block and rods.

The first step in purchasing a new chime block is to determine the chime block style that is in the clock.

The Styles are side, bottom and back strike.

Figure out which style you need. Then, count how many rods are in the chime block. Measure through the chime block to get the length of the longest rod.

Correspondingly, find this information on the drop down list for the correct chime block and rods.

Chime block style A For bottom strike and side strike units.

Side Strike Style B

Chime block style B For side strike units. Occasionally, you can also use this for back strike diagonal Westminster units.

Chime block style C is for floor clock models (and some wall clocks) with two rows of hammers on the back of the clock movement.

No matter which Clock Chime Block Style you need, there has to be some adjustments made. If the clock chime does not have a clear, crisp tone, do not panic. It could just be a matter of adjusting the hammers on the rods.

The hammer heads are on wires which are meant to be bent. Do this with your fingers, while the hammer head is down.

Then, lift and drop it to see if there is a nice crisp tone. Subsequently, do this right down the line with each hammer on whatever chime block style. Make sure each one has a nice tone. In the long run, the chime will sound perfect.

Why does Chime Hammer Positioning Need to Occur

Mechanical clock chime hammer positioning is easy to do, and only involves bending the hammer head wires. Upon the initial installation, this was done by the clock maker as well.

When replacing a clock movement need to bend the chime hammers to the chime rods. This is why the hammer heads are on bendable wires.

They are meant to be bent into the perfect position. It is not uncommon to bend them an inch this way or that way. The clock movement will not have the hammers in the perfect spot to make the correct sound when hitting the rods. This is why chime hammer positioning is so important.

A mechanical clock movement has hammers that need to be bent into their final position. The clock-chime hammer position should be so the tops of the hammer heads are about 1/4 inch down from the chime block.

The hammers need to be 1/8 inch away from the rod when at rest. In other words, bend the hammer wires so the head is 1/8 away from the chime rod. This spacing between the head and the rod is so it will not thud or double strike.

Down the line, and one hammer at a time, repeat this process. Continue in this manner until you can lift and drop the hammer to create a crisp sound. If each hammer head is done this way the clock will have a nice song in the end.

Often a customer will say the sound is not correct. It is because of improper hammer positioning that this occurs. When performing the above directions correctly the sound is beautiful.

The 340 and 341 Hermle clock movement series went through a change in the hammer wires. The hammer heads were on wires but now they are made on flat bars. This is dealt with in the same way as above, it is just not as easy to bend.

The hammer head is on the skinny end of the bar, the bar gets wider as it goes back toward the roll pin.

The point to bend this bar is at the place where it goes from skinny to wide with needle nose pliers. The overall assembly will be higher from the chime block slightly. That is if swapping out the movement with the wire hammer head rod older style.

It is an option to raise the entire chimeblock with a shim underneath it to help with this. It is not an absolute requirement, bending the hammer arms are usually sufficient. 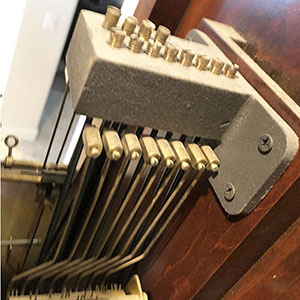 For a clean crisp chime sound 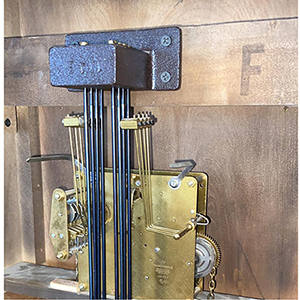 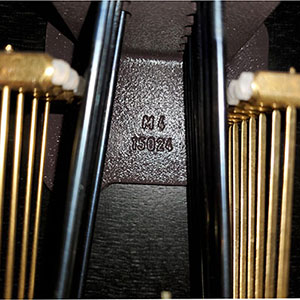 Should be about 1/8 away at rest 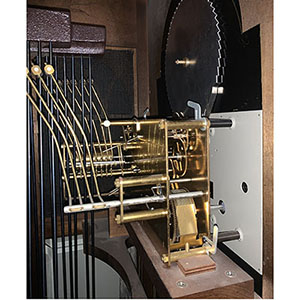 Sometimes they are bent extreme

This is a Wall Clock Coil Gong that is 4 3/4 in diameter with a brass center bushing. It includes the gong mount which mounts to the back of the clock case. There is a screw in the base that comes out, and goes through the center bushing to mount it.

For the best sound, bend the strike hammer on the movement in order to get a crisp tone. The hammer needs to be about 1/8 inch away from the flat part of the center of the gong when it is at rest. This way when it strikes it will not rest against the gong and just thud.

I suppose, you can have the hammer hit whatever you like really. Gong, Bell, Rod, Tin can, whatever you would like to listen too.