By and large, replacing a lost pendulum part from its assembly is a process. It is more in depth than just matching up the broken pendulum part. Certainly, narrowing it down requires a different method than just observation. The following text will guide you through that process.

First, identify the movement manufacturer. This is the beginning step to identify a lost clock pendulum. This is done by getting the movement numbers off of the back plate of the movement itself. That is to say, it will not be in the manual that came with the clock. Moreover it will also not be on any stickers or the clock case. All or some of these parts are what you need to order to replace lost pendulum parts. Again, the order of the parts is the suspension spring, the leader, then the pendulum. 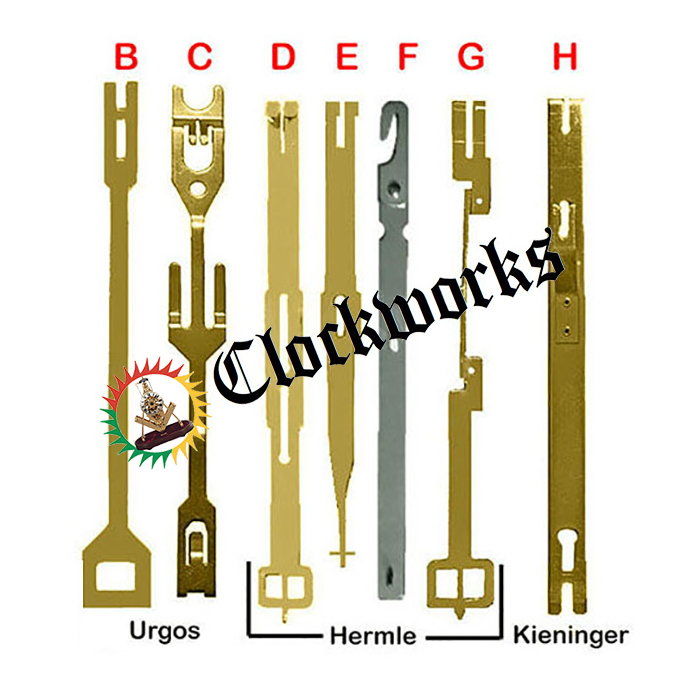 In the final analysis, visually inspect the pendulum hook style, the crutch on the back of the movement, and the suspension hook. Finally, compare the components of the clock to the options in that manufacturer category to figure out the best one. Replacing lost pendulum part can be tricky however with these descriptions the task should be less daunting. First know that style A is the very most common suspension spring style in existence. Check the top of the pendulum leader and if there is a double hook on the end it will be style A required for the clock.

Generally speaking, style A3 is used for large grandfather units, A2 for grandmother and wall clocks, and A1 for mantle clocks. Suspension spring are one of the easier parts to ascertain when replacing lost pendulum parts.

The content of this website is copyright by Clockworks and written by James Stoudenmire in year 2022
↑ Back to top
Tags: suspension springtop hookrating nut

Hello, I am so appreciative of you’re willingness to take time to read emails and see if you can help me. I read your pages first to see if anything looked like it could apply and help me, but I don’t think it can.
The mantle clock I have I bought at an an auction in the UK when we were stationed there in 1985. It was old then. I was TOLD by a clock person here in the states who cleaned for me in 1990 that it was a Westminster chimer. Being in the military we have moved several times. We have since retired. The clock has been packed and put away as my daughter wants it. I noticed when I got it down for her the key was wrapped and stuffed in the back but the pendulum is gone. If I send you pictures, is there any way you might help me? There are numbers on the plate in the same place as the others you showed in your examples, just no name, and the numbers don’t match .
I would appreciate any help or advice you could give me.
Thank you!
Julie Vaught
[email protected]
435-2755129

Best to email some pics of this one to clockworks@clockworks.com with that same question and we shall see what we can do

That would be the leader.
You can order your leader here: https://www.clockworks.com/?post_type=product&s=Leader

That would be a leader: https://www.clockworks.com/?post_type=product&s=Leader

I have an old mantle clock. The numbers on the plate are 12 CM and 196. I’m including two photos. I don’t see any other identifier.

Sorry to say that one is no longer available new. We can overhaul this one if you like, we only need the movement alone sent in. We can tell you how to remove it and reinstall it, help you along the way. When its done and installed it will run for years.

We start with this =

CLEANING AND OILING FOR ONLY $150

We have the best and most expensive tooling, cleaning equipment, and cleaning solutions. There is no expense spared by us when it comes to having the best equipment. With this factor and 3 generations of clock repair expertise, you can rest assure your clock works will be in the best hands it can be in.

For this unit, we will take the movement in, unpack it, and then clean it and inspect it for $150. If it passes inspection, we will oil it and test it. If this is all that is needed that is all it will cost is the $150 plus the shipping back to you. The initial $150 is non refundable and is the fee for the cleaning, inspection, and oiling and testing only. We do need to be paid for our time on this even if the clock movement is deemed unrepairable for some reason.

Please let us know if you are interested in this service by filling out the repair form at this link, https://www.clockworks.com/clock-repair-service.html because it would be an absolute pleasure to get this one shiny and working again.

It’s does not need anything except a replacement bob. I just don’t know what part to order. What’s the make of my clock?

What are the movement numbers off of that one? Also, how wide is the inside of the clock case where the pendulum will swing? Is it a brass pendulum or the wood stick style?

Perfect, i will be getting a replacement from you guys very soon thanks.

I am searching for a replacement pendulum for a Howard Miller grandfather clock model 610-159.

What are the numbers off of the back plate of the clock movement itself? If it is hard to get to, usually you can stick a cell phone up behind the movement and get a picture of the numbers. Or through the side access panel if there is one.