Mechanical clock movement beat-setting means the tick and the tock sound of the clock are even. In order to run, every mechanical clock that has a pendulum needs to be put in beat. It is amazing how many clocks have not run for 10 years or more just because this is not known. Often, clocks in tag sales, auctions, and homes only need to be put in beat to run but unfortunately they were left to sit for years. The setting of the beat is easy and takes less than a couple minutes to do.

Every mechanical pendulum unit needs it

Every mechanical clock that has a pendulum needs to be in beat to function. Part of owning a clock is to know how to do mechanical clock movement beat-setting. If this is not known how to do this, then whenever moving the clock from here to there it will stop after 5-10 minutes. So learning one simple solution will keep the clock running for years.

By over swinging the pendulum, most modern German mechanical clock movements can be put back into beat. This is also known as Auto Beat and is found in most post WW2 German clock movements. It's the first thing to try when a clock will not stay running. It is ok to try this even if the clock doesn't have auto beat built in. If the clock sounds like ticktock ticktock, instead of tick-tock tick-tock, or even tocktick tocktick, then it is not in beat. The clock may stop after 5 minutes, or even an hour, if it is still not in beat. Will also hear an uneven tick and tock. A rhythmic tick-tock tick-tock can be heard when it is correctly in beat.

The beat is the rhythmic pulsations of the escape wheel clicking over one tooth at a time. This results in the tick tock sound as each tooth "escapes" from the rocking anchor that blocks it. The anchor rocks back and forth from the pendulum motion and is only on its arbor by friction fit. In other words, it will rotate independently of the arbor it is riding on. The tick or tock sends a jumping pulse action to what is known as a crutch. Then this crutch whacks the pendulum slightly with each swing. The back and forth momentum of the pendulum, in addition to the whacking motion made by the crutch, keeps it going and going. However, this is provisional depending on whether it's even, left and right. Or in other words, the tick and tock are even. Once this happens, the mechanical clock movement beat-setting should be complete. 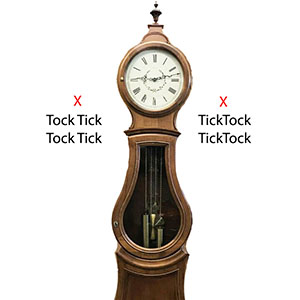 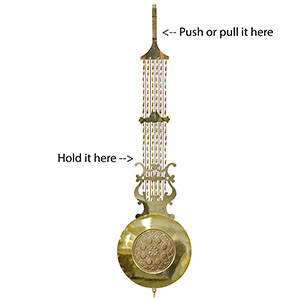 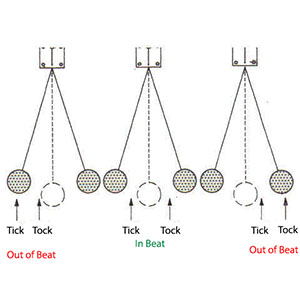 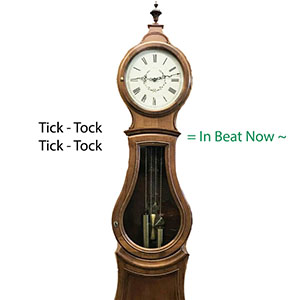 The content of this website is copyright by Clockworks and written by James Stoudenmire in year 2022
↑ Back to top
Tags: beatstay running

No tick tock sound at all and pendulum won’t stay running. Is it time for a new movement. Current movement is 30+ years. It is is Hermle 450 050

Time for the new one.
Please order the 451-050 from this link
https://www.clockworks.com/product/new-451-050-clock-movement-by-hermle

The CM length off the back plate is also needed. Also please see pics of the movement comparison on high bridge or low bridge so the correct one is selected

Yes it sure is, it is all oiled and all set

Oiler to buy in 5-10 years is at this link
https://www.clockworks.com/product/needle-pen-clock-oiler

pendulum runs a short while and stops